Ranked ballots can be used in two different ways.  In single-winner elections (such as mayor, or wards with only one Councillor), candidates need 50%+1 of the votes to win.  In multi-winner elections (such as at-large councils or wards with multiple councillors) the threshold is reduced, and a system called the “Single Transferable Vote” (STV) is used to determine the winners.

The first system is considered a “majoritarian” system, and the second method is “proportional”.

Both systems encourage positive campaigns, eliminate strategic voting, create a more level playing field for new voices and improve the fairness of the outcome.  The multi-member model, however, provides the most accurate representation and is more likely to increase diverse representation on City Council.

It's very simple: the winner has to get 50% of the vote.  If no candidate has a majority on the first count, then the candidate with the least votes is eliminated and those ballots are transferred to the 2nd choice listed on each ballot.  This repeats until someone wins. Easy as 1-2-3! 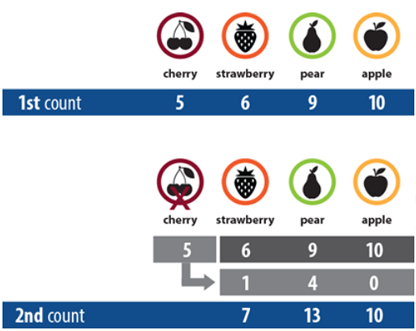 This system is being used all across the USA for municipal elections and is used by all parties in Canada to choose their leaders.

With multi-member districts, it's a little different because the threshold is less than 50%.  You use a simple formula to create the threshold:

The other difference is the surplus transfer.  Before you eliminate candidates who have the lowest votes you transfer any extra votes that the winning candidates have, above and beyond the threshold.  In the example below, it's a three-winner race.  On the first count, "Swings" passed the threshold and won a seat.  But because they got MORE votes than they needed, the extra votes are transferred, based on second choices on the ballots:

This is one of the best electoral methods available, and produces very accurate results, much better than First-Past-the-Post and even better than single-winner Ranked Choice Voting.  Multi-member STV is currently being used in Australia, Ireland, Cambridge Massachusetts and was selected by the BC Citizens Assembly on Voting Reform.